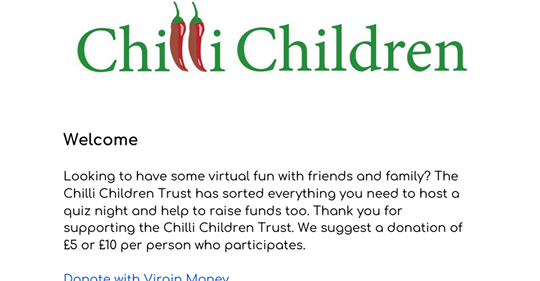 Welcome
Looking to have some virtual fun with friends and family? The
Chilli Children Trust has sorted everything you need to host a
quiz night and help to raise funds too. Thank you for
supporting the Chilli Children Trust. We suggest a donation of
£5 or £10 per person who participates.
Donate with Virgin Money
Enjoy!
Logistics
There are 40 points available across 6 rounds
- General Knowledge
- Where am I?
- Who am I?
- Sport
- Food and Drink
- Chillis
Donate with Virgin Money
Questions
Round 1: General Knowledge
1. What is the capital city of Uganda?
2. Which spirit is used to make a Tom Collins cocktail?
3. From which country does the Pug originate?
4. Which Roald Dahl book features the story of a tortoise?
5. Which planet does Superman come from?
6. What is a female giraffe called?
7. Where in the body would you find the humerus?
8. What is the national animal of Scotland?
9. Which country has the shortest coastline in the world?
10. Which is the most common colour featured on the
national flags of the world?
Round 2: Where am I?
1. Located in Agra, this building was commissioned in 1632 by
the Mughal emperor Shah Jahan to house the tomb of his
favourite wife.
Donate with Virgin Money
2. Construction of this building, designed by Antoni Gaudi,
began in 1882. It was consecrated and proclaimed a minor
basilica by Pope Benedict XVI in 2010.
3. This 15th-century Inca citadel is located in southern Peru ,
on a 2,430-metre (7,970 ft) mountain ridge. It remained
unknown to the outside world until American historian
Hiram Bingham brought it to international attention in 1911.
4. I have travelled 3 days to reach my destination and am
overlooking the Sea of Tranquility.
5. Part of the Republic of Ecuador, these volcanic islands
were visited by Charles Darwin in during the second
voyage of HMS Beagle
Round 3: Who am I?
1. Born Reginald Dwight in 1947, I have had 7 UK number 1 hits
and received a Knighthood for “services to music and
charitable services" in 1998.
2. With 91 victories, I have won more Formula One races than
any other driver in history.
3. I was born in Greece in 1921, I have 4 children and I am
idolised by the Kastom people of Vanuatu.
4. Born in August 1972, in 2015 I succeeded Nick Robinson as
BBC News Political Editor and became the first woman to
hold the post.
Donate with Virgin Money
5. I am a comedian and presenter. I became Chancellor of
the University of Plymouth in 2012 and co-founded the
Women's Equality Party in 2015. Until 2020 I co-presented
the Great British Bake Off alongside Noel Fielding.
Round 4: Sport
1. Which sport has the largest playing field?
2. What is the national sport of India?
3. Which team is commonly known as the All Blacks?
4. Which city will host the 2024 Olympic Games?
5. Which country won the World Cup in 2018?
Round 5: Food and Drink
1. What is the best selling flavour of soup in the UK?
2. Quinine is used to flavour which popular mixer?
3. Which small animal kept as a pet in the UK is considered a
delicacy in Peru?
4. If you wanted your steak to be cooked extra rare, which
colour would you ask for?
5. Arachibutyrophobia is the fear of what sticking to the roof
of your mouth?
Donate with Virgin Money
6. Which year did The Great British Bake Off first appear on
TV?
7. Which flower does the spice saffron come from?
8. A magnum bottle contains how many standard bottles of
champagne?
9. In 2012 an American set a new world record for the most
number of bananas peeled and eaten in one minute. How
many did he eat?
10.Now known as Starburst in the UK, what were these sweets
called until 1998?
Round 6: Chillis
1. Place these 4 chilli peppers in order from least hot to most
hot (one point per correct position)
California Reaper, Jalapeno, Cayenne, Bell Pepper
2. What scale is used to determine the "hotness" of a chilli?
Donate with Virgin Money
Answers
Round 1: General Knowledge
1. Kampala
2. Gin
3. Pug
4. Esio Trot
5. Krypton
6. Cow
7. The arm
8. Unicorn
9. Monaco
10. Red
Round 2: Where am I?
1. At the Taj Mahal
2. At the Sagrada Familia
3. At Machu Picchu
4. On the Moon
5. The Galapagos Islands
Round 3: Who am I?
1. Elton John
2. Michael Schumacher
3. Prince Philip, Duke of Edinburgh
4. Laura Kuenssberg
5. Sandi Toksvig
Donate with Virgin Money
Round 4: Sport
1. Polo
2. Hockey
3. New Zealand Rugby team
4. Paris
5. France
Round 5: Food and Drink
1. Tomato
2. Tonic water
3. Guinea pig
4. Blue
5. Peanut butter
6. 2010
7. Crocus
8. 2
9. 8
10.Opal fruits
Round 6: Chillis
1. Bell pepper, Jalapeno, Cayenne, California Reaper
2. Scoville scale
Donate with Virgin Money 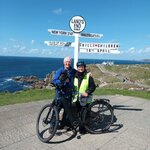